Over the past two days I have been transformed from a docile American English teacher into a ferocious pig-fat fighter, a powerful chorizo-meat mixer, a cauldron-stirring bruja  and a brave (in my opinion) intestine de-tangler. I have participated in a Matanza. And it. was. awesome.

Matanza is the Galician celebration of the yearly pig slaughter. Every year, around Christmastime, families and neighbors in aldeas (tiny rural villages) gather to kill, cut, grind and preserve all the pig meat they will eat for the next year. And being that this is Spain, that is a lot of meat. Matanza is where the positively delicious chorizos and salchichones are seasoned, stuffed and hung to smoke for a month, where the legs of jamón are cut and sent to cure for two years, where the pig faces are salted and the loins are seasoned and the bacon is cured. It is four full days of pig processing.

Witnessing this 100 percent Galician tradition was like being transplanted into the ancient times… like before electricity ancient. It was not glamourous, but neither was it particularly gory. I expected to emerge from Day One with blood-soaked clothes and raw carne under my fingernails, but thanks to sturdy gloves and a modern law forbidding families from slaughtering their pigs at home, all that gore was reserved for the butcher and our pigs arrived blood-free and cleanly chopped in half.

**Warning: If you don’t like raw meat or easily get queasy, stop here! **

The pigs arrived on our chopping block in halves, ready to be dissected into dozens of pieces and parts.

My Matanza adventure began, in typical Spanish fashion, at 11 a.m. with a cup of cafe con leche.  As soon as the coffee cups were empty, the pigs arrived. We had four cerdos to chop that day, meaning nearly 1,200 pounds of raw meat awaited us in the barn next to Victoria’s house.

Three of the four pigs that made up our matanza were raised within 50 feet of the barn we were chopping them in. Victoria (the language coordinator at my school) and her neighbor fed them everything from kitchen scraps to home-grown pumpkins over the past year, fattening them up to turn them into a year’s worth of sausages, stews and steaks.

The fourth pig was an Iberico, the most coveted and hands-down delicious type of pig on the peninsula. Ibericos are from Andalucia (the region where I studied abroad) and are supposedly the best because they eat a particularly delicious type of acorn that only grows in that region in the south of Spain.

Minutes after arriving at the barn,  giant pig halves draped insides-up over mens’ shoulders came shuffling in. I was shocked by how completely content these sliced-open, eyeless cerdo carcasses looked.

As soon as the fourth head slumped with a sturdy smack against the chopping table, knives flew into hands, chatter ceased, orders were shouted and pig parts started flying. A pig chopping expert who was hired specifically to partition the pigs started at the top, slicing the skull open and swiftly removing the jaw with an axe. He wasn’t messing around here. This mantanza is serious stuff! He scooped out the brain, which was super small (about the size of two walnuts) and about the consistency of half-melted Jell-O, using his pinky finger. 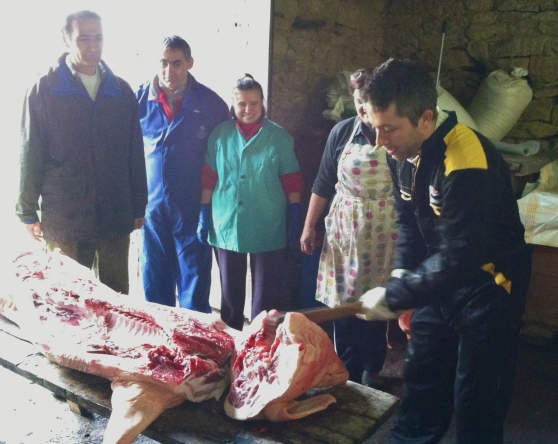 The resident pig cutter starts the day off with an axe to the head.

A tractor bed full of pig parts is ready to be cured in salt.

The butcher man sliced out the ribs (using what looked like tree clippers) and the loins and all the other parts that would be left casi whole and either cured in salt or frozen for stews and steaks. All the rest was tossed onto a long white table where five other women and I stood waiting with our filet knives. My job for the day was extracting the pinkish flesh from the layers and layers of butter-like fat. The meat we dissected would later be ground up to make chorizo. I dub Day One of matanza the “Fat-Fighting Day.”

Six of us women were in charge of de-fatting the left-over pig parts that would eventually become chorizo.

Sporting a sexy pink smock that Victoria’s grandma wore 70 years ago, I stripped the fat from the meat.

Three hours and two pig carcasses later it was time for a celebratory Spanish lunch break. My gloves were caked with fat and flesh, my fingers ached from hours of precision knife-work and most of all my stomach groaned for a nice filet of fresh pork. Which, much to my joy, was exactly what Victoria had on the menu for almuerzo! As Victoria was flipping the garlic and olive oil covered filets, she looked up, smiled at me and said “Just think, these were alive yesterday!” Only in Galicia… 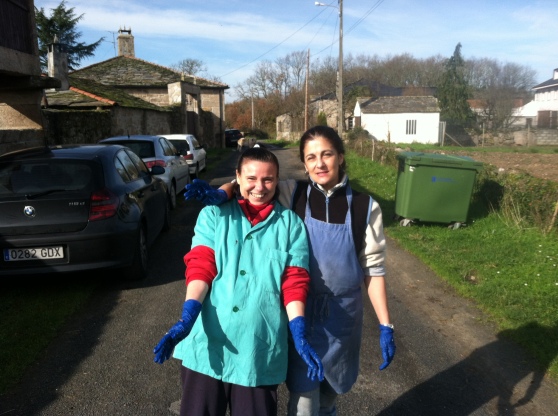 The best elementary school principal and vice principal in all of Spain!

After lunch, we took a quick break from the cutting and chopping to cure the face, ribs, bacon and other large pig parts. In order to cure it, the meat is packed in salt for about fifteen days. In one of Victoria’s ancient (and I mean ancient, these things were built in the 1500s) stable stalls, there is a trough made from a hollowed-out tree that her husband’s family has cured their meat in for over 100 years. To me, it looked like an extra-deep version of those preschool sandboxes where you have to root out the plastic dinosaurs.

The century-old curing trough where a bunch of random pig parts are buried in salt for two weeks.

While the afternoon was dedicated to chopping and slicing, the evening was devoted to grinding and stirring. Each family had their own huge bucket full of meat scraps for their chorizos and a smaller tub of pure, fat-less meat to make into salchichones. Ever since arriving in Galicia I have been trying to deduce the difference between chorizo  and salchichon, both of which are served sliced during nearly every meal. Thanks to matanza I finally understand!

Salchichon is made from the lean parts of the pig and is mixed with it’s own special blend of pre-packaged “salchichon” seasonings. Chorizo, on the other hand, has a bit more fat and involves a four-day process. The first night it’s ground and mixed with water, salt and garlic (very generous amounts of all three). The second night, a pinch of the chorizo meat is cooked and tasted to check for sufficient saltiness and handfuls upon handfuls of bright red paprika powder of both the sweet and spicy variety are stirred in. The third night it’s tasted again to check for the right balance of sweet and spicy. And finally after four nights of marinating, the meat is packed into small intestines and hung to smoke for nearly a month. 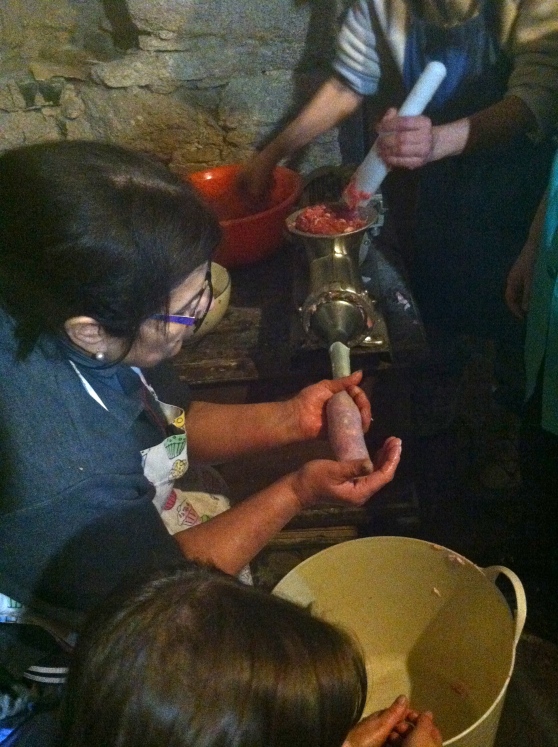 Victoria helps Fina tie off the end of her Salchichones.

Since the salchichones don’t have to marinate, we spent the last two hours of the evening tying off intestines to make the salchichones. We weren’t two sausages in before the first person made a broma about the size of the sausage. “That’s a big one, wonder who’s house that’s from!” “Save those long ones for the Paz house. Our house always has big ones!” Apparently, when it comes to salchichones size matters. Some jokes are the same no matter what country you’re in! 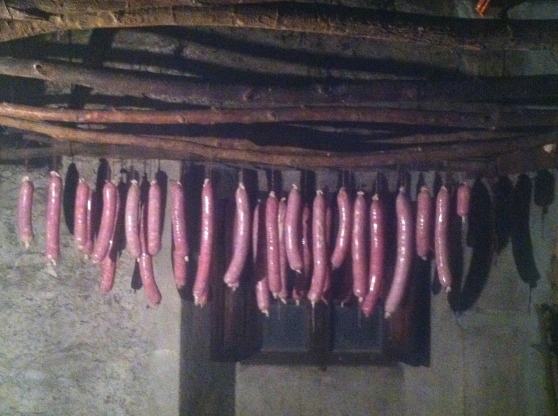 Salchichones hanging to dry. Not bad for a day’s work!

2 thoughts on “The Killing of the Pigs (a.k.a. the genesis of all Spain’s savory scrumptious deliciousness)”