The more Spanish I learn, the more I love the quirks of this language. From the teacher’s lounge to my tutoring classes I’ve stumbled upon some positively delightful phrases that I now try to work into conversation as much as I possibly can.

To me, these quintessentially Spanish phrases are a fantastic window into the Spanish way of thinking. Something is totally unobtainable? It’s no pie, it’s a castle in the sky! Nobody at the bar? You’re not by your lonesome, you’re with four cats!

Here are a couple examples of my favorite Spanish phrases:

One of my favorite protest signs: “There’s no bread but there are plenty of cheats!”       Image credit here.

What it means:  It literally translates to “only bread and sausages.” Unethical people who rob, steal and cheat in Spain are colloquially referred to as “chorizos,” and because of the economic crisis the only thing people can afford to buy is bread, a super-cheap staple of Spain’s diet. Therefore, it basically means “only bread lines and cheats.”

Why I love it: This rather distressing, yet colorful phrase is a trophy of my teacher’s lounge recess breaks. While glancing through the ever-disturbing headlines about Spain’s political corruption, one of my favorite teachers looked up and, shaking his head muttered, “solo pan y chorizos.”

It is the perfect phrase to sum up the situation Spain is in right now politically and economically. The recession here in Spain puts the United States’ economic downturn to shame. The national unemployment rate hit 26 percent this month (that’s twice as bad as the U.S’s worst month during the recession). Youth unemployment is even more dismal. More than HALF of young Spaniards (between 16 and 24 years old) can’t find work.

And to add insult to injury, the ruling party is mired in a massive corruption scandal. Nearly every top member of the party (including the Prime Minister) is accused of accepting tens of thousands of euros from a slush fund stashed in Swiss bank accounts. Not even the royal family is escaping the madness. The king’s son-in-law is in court on charges of embezzlement, forgery and public fraud for pocketing six million euros in public funds.

Thus, in Spain there is “solo pan y chorizos.”

How to use it: One of my favorite protestor signs is “No hay pan pero tanto chorizo.” (There is no bread but there are plenty of cheats).  Or you could use just “chorizo” and say something like “Partido Popular es llena con chorizos” (The Popular Party is full of cheats).

Something is totally unobtainable? It’s like making “castles in the sky!” Image credit here.

What it means: Literally: “castles in the air.” It is basically the equivalent of the English “pie in the sky.”

Why I love it: The Spanish version of this phrase is awesome, but the French version is even more fun. As the resident-expert-on-everything/gym teacher Jose Manuel informed me, in France when an idea is so far fetched that it is positively unachievable, the French say it is “like a Chateau in Spain.” (!!!)

How to use it: It’s a great way to underscore how completely impossible something is. For example, “Pensar que los estudiantes van a estar en silencio por un clase entero es como hacer castillos en el aire.” (To think that the students will be silent for a whole class is like making castles in the sky.)

I wasn’t making a killing but I was definitely living like it was August while devouring these croquetas at Levies in Sevilla!

What it means: Literally: “To make the August.”  Figuratively: “to make a killing.”

Why I love it:  Most Europeans have the entire month of August off of work and school, because Europe is awesome like that. A huge portion of these vacationing people flock to Spain every year. Sleepy villages are transformed into busting sunbathing hotspots. Restaurants that usually cater to a small clan of local coffee drinkers are packed to the brim with tapas-devouring tourists. Thus, the shop-owners and restaurant-runners often make as much money in the month of August as they do in the entire rest of the year. “Hacer el augusto” makes me think of my favorite tapas spot on Sevilla, it’s sun-filled patio packed with people and my table overflowing with tinto de verano and croquetas espinacas. 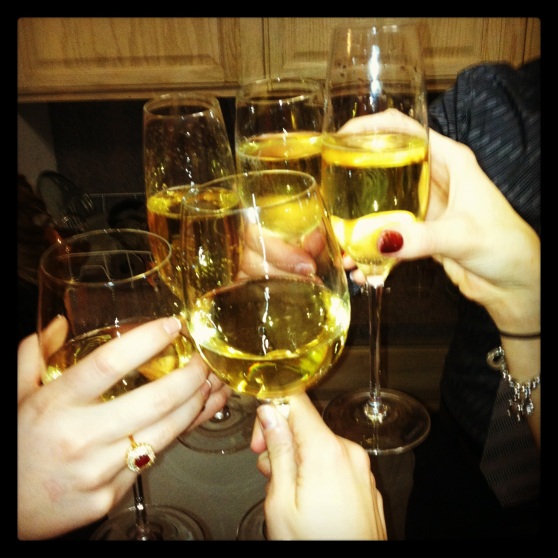 I’m not a fan of borracho, but I am big supporter of piripi!

What it means: This fantastically fun-sounding word (pronounced “pee-dree-pee”) means “tipsy.” As in, I’ve had a few drinks and am feeling happy and bubbly, but not drunk.

Why I love it: This is the word the English language has been missing. Just like in English, the Spanish word for “drunk” (“borracho”) is a strong, rough-sounding word with a bad connotation. “Piripi” on the other hand sounds exactly like I feel after two glasses of scrumptious Spanish tempranillo. It’s light, fun and happy, just like I am after savoring a glass (or two) of wine!

How to use it: Scenario: You’re sitting at a bar, halfway through a tapas bar hop when a new friend walks in to join the group. “Estas borracha? (Are you drunk?)” they ask after you give dos besos a tad too enthusiastically. “No, no no, estoy piripi! (No, no, no I’m happily tipsy!)” you can respond!

Concert was practically empty? Then there were only “four cats!” Image credit here.

What it means: Literally: “There is only four cats.”

Why I love it: Every time I hear this phrase (which isn’t nearly often enough!) I picture myself standing in the middle of a huge outdoor concert area (much like Stubb’s in Austin) surrounded only by empty dirt when four stray cats go scurrying past. It doesn’t get more dead than that!

How to use it: When someone asks if there was mucha gente when you went shopping at the mall yesterday, but the place was practically deserted, the perfect response would be, “No, solo yo y cuatro gatos! (No, only me and four cats)”

3 thoughts on “My Favorite Spanish Phrases”