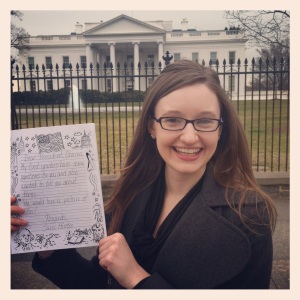 “Delivering” letters from Texas first-graders to President Obama in 2012.

I’ve heard this story before. I’ve written this story before. And I can picture exactly what my day would be like if I’d chosen to stay on the path that so many of my peers strived to get to. It would have been frantic and stressful, frustrating and unsatisfying. It would be hammering out headlines in moments of sheer panic, then combing through Twitter in search of an update or a new angle. I would have typed myself into oblivion and left late, feeling defeated and behind the curve. Thus is the maddening immediacy of online news.

Instead, as history repeated itself in Washington, I stuck my tongue out at a Spanish second-grader, trying to help him understand the English “th” sound. While a Twitter tizzy of took off across the ocean, I got contagion-hugged by half a class of first graders whose tiny hands could hardly reach my belt loops. Today, while my country was in a politics-driven craze, I drank my morning coffee sitting down and basked in the afternoon sun on my balcony. 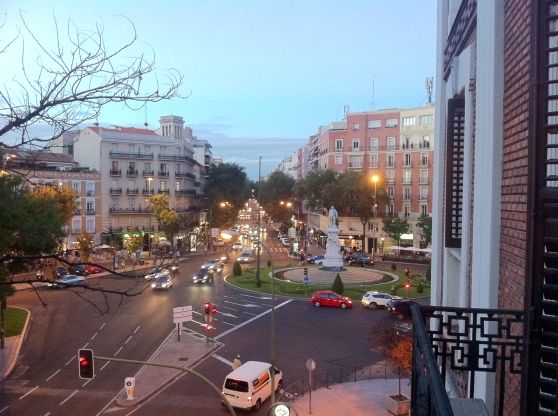 And amid the cognitive dissonance of last year versus this one, it hit me: I live in Madrid. I’m not visiting, or touring or just passing through. This is my new home. And from this distant vantage point I can see the frivolity of many of the things I used to live and die by in D.C. Is American politics a big ‘ol mess? Yes. Is the sun going to rise and the coffee going to brew and the email from my Mom going to come through tomorrow if Congress doesn’t pass a bill tonight? Why yes, yes it is.

I tried to explain to my roommate in my improving but still crap Spanish what all the fuss was about in the States right now. All the Spanish news channels are covering the shutdown and the debt ceiling debate, but let’s just say the story is about 1/100th as long as last night’s soccer match re-cap. As my voice began to rise in frustration and annoyance at the history that was repeating itself in D.C., my roommate sighed, nonchalantly plopped another piece of sushi in his mouth and said “Bienvenidos al club, Amy.” Then he told me that Belgium went two years without a government while three leading parties battled for control. He told me about never-ending-cycle of Spain’s two most powerful parties which strategically tweak the laws to keep themselves in power, “like a fish with his tail in his mouth, it just goes round and round without end,” he said. Then we got sidetracked while I tried to pronounce “pass a budget” in Spanish — try saying “se aprueba el presupuesto” ten times fast! — and ended up laughing about appliances. 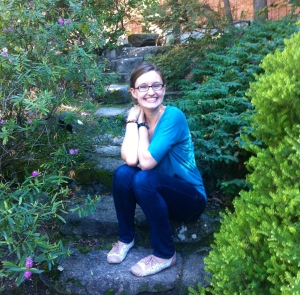 Afterward as I walked toward my bedroom down the long hallway of our apartment, an intricate and peaceful melody drifted from the salón. I stopped for a moment to listen to my other roommate, a concert pianist and opera singer, as her fingers danced across her new keyboard. And that’s when I knew for the first time with certainty, that I’d made the right decision.