I didn’t realize until I was rolling Cristóbal (my four-wheeled red Samsonite and most trusty travel companion) across the soaking wet sidewalks along Burgos’s Arlanzón river just how badly I’d been needing a city break. Madrid is fantastic. I love living here. But it was definitely time to get outta the city for a hot second. For two glorious days I left the stress of Trinity English Exams, summer job applications and blog name frustrations behind and went on a mind vacation to Burgos. 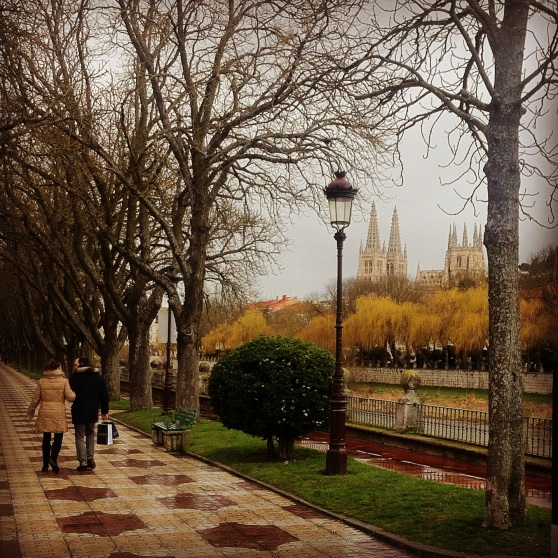 The 180,000 person medieval town is about 2.5 hours north of Madrid by bus in the province of Castilla y Leon. It has an 800-year-old gothic cathedral (named a UNESCO World Heritage site), a monastery so beautiful that kings get married there and a museum projected to be one of the most-visited in Spain within the decade.

But let’s be real. That’s not why I wanted to go to Burgos. For me, it was all about the food fame. Burgos was named the Gastronomic Capital of Spain in 2013 and I was bound and determined to see if it could live up to that title. Here’s a hint: IT DOES!

Burgos is known for three things: Ribera del Duero wine, cured sheep cheese and blood sausage. Being someone who turns pale and nauseous at the sight of blood (animal or otherwise), I have, as a general rule, steered clear of Spanish blood sausage, or morcilla. But when in Burgos I figured it was necessary to do as the Burgalese do. So I sucked it up and order a plate of the famous Burgos morcilla. Great. Freakin. Decision.

Morcilla is, at it’s most basic, a mixture of pig blood and rice (a fact I prefer not to think too much about) stuffed into pig or cow intestines. In Burgos it is typically sliced into thick medallions, seared to a crisp on both sides  and served with roasted red peppers. One bite and I didn’t care what it was made of. The crisp outside gave way to an intense, rich, slightly smokey flavor punctuated by the subtle texture of the rice. Needless to say I beelined for the first artisanal morcilla shop to stock up. 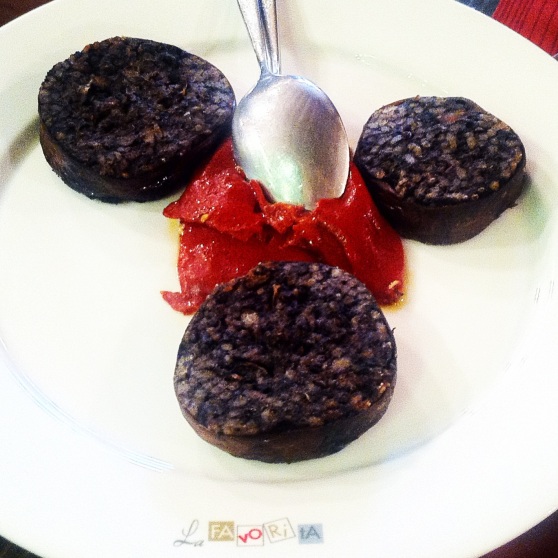 Where to find it: You can find great morcilla at just about any bar in Burgos. The best I had was at La Favorita on Calle de Avellanos, 8. I bought a sausage to take home at La Paloma, a small artisan shop on calle Paloma.

This may just be the best restaurant I have ever been to in Spain. I know! Bold statement. Without a doubt it is in the top five. El Morito is fantastically Spanish in that it has a long bar running down one side of the restaurant where people crowd three-deep to order a 1.20€ glass Ribera and a combo of highly original tapas and raciónes. A smattering of wood tables and four-legged stools line the wall and are perpetually full. Upstairs more long wooden tables are set with bright yellow paper placemats and are equally packed with people.

While awaiting our table for lunch, we situated ourselves at the far end of the bar with a direct view of the grill, where the calmest man in all of Spain was methodically cracking brown eggs, searing thick slices of goat cheese and warming piles of grey gulas, or imitation baby eels which taste like spaghetti noodles made of fish. Creatively constructed plates piled with for example, potatoes and eggs topped with grilled calamari and diced cured ham came flying past us. It was like a mouthwatering parade of food ingenuity. Ten minutes at Morito and I was convinced that Burgos was absolutely the food capital of Spain.

Grilled shrimp with gulas, smoked fish, salmon, crab and caviar and a salad of pickles, tomatoes and crisp lettuce.

Where to find it: Cerveceria Morito on Calle Sombrereria 27

One of the first things I noticed in Burgos was how out-of-their-way nice the people there were. From the German-suit wearing old man (I’ll leave that insanity for another post…) to the waiters and bartenders, Burgaleses were more smiley, talkative, inviting and helpful than any other city I’ve visited in Spain.

Our camerera at La Parrilla was fantastic. She happily recommended me her favorite tapa, checked up on us to make sure we liked our food and smiled the whole time. Was this still Spain?!? Her cheerful wonderfulness aside, her tapa recommendation – an anchovy, arugula and tomato tosta- was deeelish. The small tosta was a perfect blend of crunch and fluff, with the sweetness of the ripe tomato perfectly offsetting the saltiness of the anchovy. Gastronomic Capital: 1, Rest of the World: 0.

Where to find it: La Parrilla de Royal on Calle Huerto del rey, 18

After a night of heavenly tapas, we decided to test out Burgos’ lunch menu scene on Saturday afternoon. Armed with a recommendation of a local, we headed to the narrow, bar-lined street of San Lorenzo, just off of the Plaza Mayor in search of Casa Pancho.

As luck would have it, they don’t serve their fixed menú del dia on Saturdays. Silver lining: they did have a couple seasonal lunch specials. We ordered the first on the list, artichokes stuffed with wild mushrooms atop crispy cured ham. If I could please have this every day of artichoke season that would be superb, thanks.

Where to find it: Casa Pancho on calle San Lorenzo, 13

The typical Spanish breakfast of toasted baguettes topped with olive oil and tomato is delicious no matter where you get it. The bread is always freshly baked, the tomatoes ripe and flavorful and the olive oil, well, come on this is Spain, the top producer of olive oil in the world.

But in Burgos, this traditional morning combo was kicked into high saturation. The tomato wasn’t just red, it was blooming poppies on a sunny spring morning red. The bread wasn’t just fresh, it was perfectly toasted, crisp on the bottom and still soft and fluffy on the top fresh. And then there was the fresh squeezed orange juice. And the café con leche. And, well, just go to Burgos, okay? 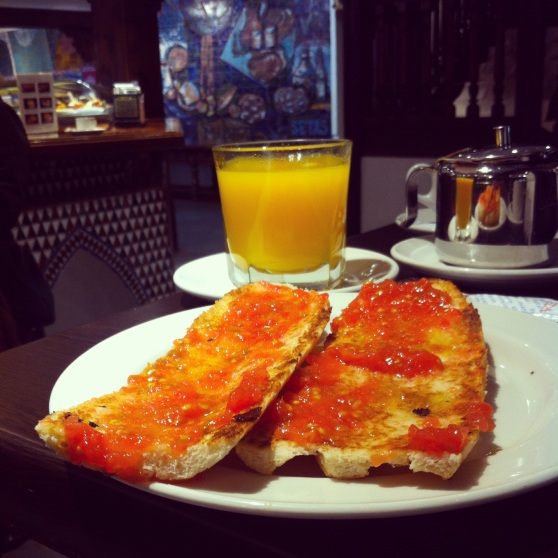 Where to find it: Delicatessen Ojeda on calle Vitoria, 5. This is also a great place to stock up on traditional foods to bring home from Burgos! They’ve got a good Ribera wine selection and a huge variety of other prepared and conserved foods!