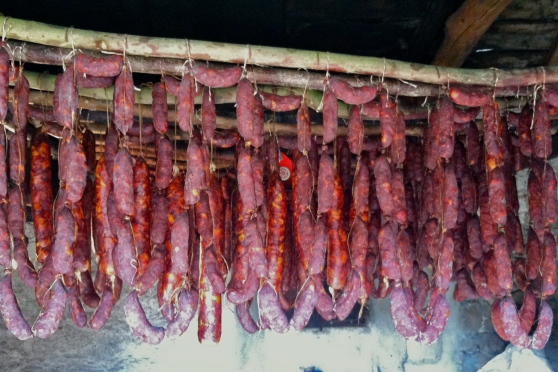 Nearly 1,000 links of chorizo hang in a smokey, stone room to cure for one month.

After spending mere days in Spain, there are two questions about which it is nearly impossible not to form devout opinions, opinions that conjure up deep defenses and invite fierce debate. The first pregunta, clearly, is “FC Barcelona or Real Madrid?” The second is “salchichón or chorizo?” My answer to the first question I base primarily on color preference and the charming good looks of a particular jugador. But my preference in the second match-up is far better researched, stemming from months of incessant questioning, hours of meat-cutting manual labor, days of thought,  and countless taste tests. 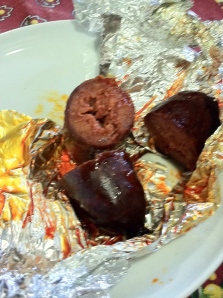 While most of the chorizo served up at every meal is the fully-dried version. This semi-dried hot style is even more scrumptious!

Chorizo and salchichón share a plate on the table at nearly every Spanish meal. They, like bread, persist through both the first and second courses and unlike Spain’s plethora of regional dishes, are popular in the entire peninsula, tempting idle fingers away from forks from Santiago to Sevilla to snatch these often-homemade delicacies. In Galicia, these staple sausages are more than just a mid-meal diversion, they are a family business, a strictly-guarded recipe and a direct reflection of the patriarch’s (or matriarch’s) taste buds.

For me, the question of taste in the face-off between chorizo or salchichón was obvious.  Salchichón, the lighter of the two sausages, tastes drier and meatier, usually with a hint of garlic but little else to excite the palette. Chorizo, on the other hand, is visually striking with white dots speckled throughout the bright redness of the sausage. It fills your mouth with flavor, zapping awake the salt sensors of your tongue, exciting the savory centers, brushing fleetingly through the sweet sides and igniting the slightest burn of spice as it tumbles through the back of your mouth.

But until three weeks ago, I could not for the life of me definitively discern why  these two types of sausage — both created from the same animal (pig), cured for the same amount of time (one month) and served in the exact same way  (sliced with bread and cheese)– could taste so completely different. Each time I asked one of my authentically Galician friends the answer was siempre vague. “Chorizo has more fat,” one matter-of-factly stated. “It’s the seasonings,” another responded, opting not to elaborate. 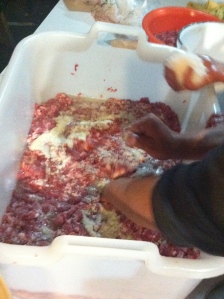 The resident expert on Matanza dumps a heaping handful of salt into the already-garliced chorizo meat.

I did not fully appreciate the complexity of Spanish chorizo until my arms were elbow deep in a vat of freshly ground pork and my eyes were watering with the pungency of garlic, salt and raw meat. We were wrapping up the first day of matanza, the four-day family pig slaughter, which meant adding the first round of seasonings to each family’s tub of chorizo meat. Looking across the ancient barn at the half-dozen multi-colored vats of meat, I finally began to understand the answer to a burning question I had thus far been unable to satisfactorily answer. While chorizo and salchichón come from the same pig, they could not be more different. The former has more fat, more seasonings (a small mountain of firehouse-red paprika), more steps (season, taste, season, taste) and takes a whole lot more TLC (stir, wait, taste, mix, try, add, cure, store, cook, don’t cook… you get the point). The later is a quick, one-day-and-done affair, made from the leanest cuts of meat and seasoned only slightly with garlic and salt (no wonder it’s not nearly as delicious!)

Five families were participating in our matanza and each had very rigid specifications for their chorizo seasonings. In the first round of seasoning, one group wanted garlic mixed with water, another preferred straight minced garlic. One liked an extra sprinkling of salt, another added only a scant handful. Once the meat was garliced and salted to everyone’s liking, it sat overnight to absorb the flavors. The next day a golf-ball sized scoop was pan-seared and tasted. In went more salt or more garlic or more water followed my a flurry of mixing and stirring. Again the meat sat to season.

On the third day the real fun began when one-kilo bags packed with powdered paprika were ripped open and scattered into the meat. Handful by handful each family expertly added their desired ratio of sweet to spicy paprika as their hands, elbows  and noses turned redder and redder.

Paprika, a staple of the Spanish spice cabinet, was dumped my the fistful into the tubs of soon-to-be-chorizo. 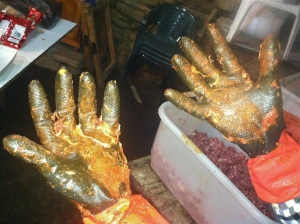 Holding up her meat-stained gloves Marta remarked that Gallegos have a lot in common with vampires.

One more day of waiting and it was time for the final taste test. Each couple assembled in front of their prized meat, rolling a tiny bite from side to side in their mouth. Celebratory cervezas were popped open and delighted “Mmmm delicioso!”s sizzled throughout the frigid barn.

A team of six assembled early the next morning for seven hours of straight chorizo stuffing. Unbeknownst to my ill-advised American brain prior to matanza was the type of tube that my scrumptious Spanish sausages were stuffed into. I naively assumed it was some sort of pre-fabricated mesh, plastic perhaps. How wrong I was. The holder of this joyous embutido is none other than salted pig intestine.

Preparing these less-than-appetizing exteriors  must have been, back in the day when Galician families used the intestines of their own freshly-slaughtered pigs, the most disgusting job of the year. Nowadays the (much smarter) younger generations buy already cleaned and salted intestines from China (ironic? absolutely.). Nevertheless, the 15-meter (50-foot) intestines must been rinsed and wound into yarn-like balls before the chorizo stuffing can commence. Not wanting to miss one step of the the matanza, I scurried off to the barn to help with the intestine-rolling after the pig-cutting had ceased. Big mistake. 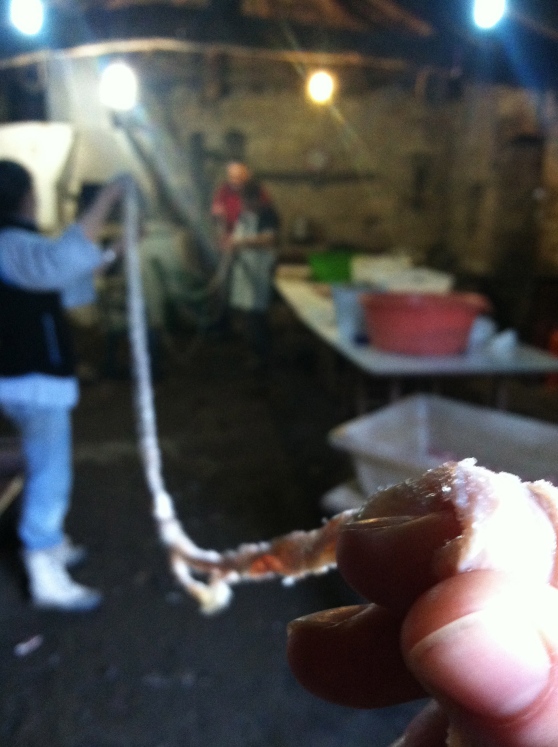 The salty, squishy strings of intestine stretched the length of the barn and filled it with a stench so foul I almost lost my lunch.

Pig intestine (despite the fact it is already “cleaned”) smells exactly as you would expect an organ responsible for the final stages of cerdo digestion to smell. The eyeless pig faces didn’t bother me. The heaps of raw meat left me unfazed. But the foul stench of Made-In-China pig poop nearly sent me retching. I am absolutely going to meticulously peel the “casings” off of every slice of sausage from now until eternity.

The fruit of or labors sparkles on the hot coals of the antique stove.

By the end of the matanza more than 900 links of chorizo hung from wooden beams in one of Victoria’s 16th century stables. For three weeks a small fire continuously smoked the chorizos until they had halved in size. Last weekend, I got to savor the first taste of my hard work. The first phase of smoking was complete, and a small percentage of the sausages migrated from the smokehouse to the freezer to be added to stews, fried or barbecued throughout the year. One of those six-inch long paprika-filled pockets of joy was wrapped in foil and thrown into the coals of Victoria’s cast-iron stove for us to probar.

In minutes the sparkling package was sizzling and Victoria sliced open the brilliant, deep red chorizo. I don’t know if it was the memory of mucho trabajo, the weeks of anxious waiting or the tried-and-true family recipe, but that bite of pipping-hot chorizo was hands down the best I have ever tasted.

If there was ever a doubt about which sausage reigns supreme, this little slice of happiness handily tips the scales in favor of chorizo.